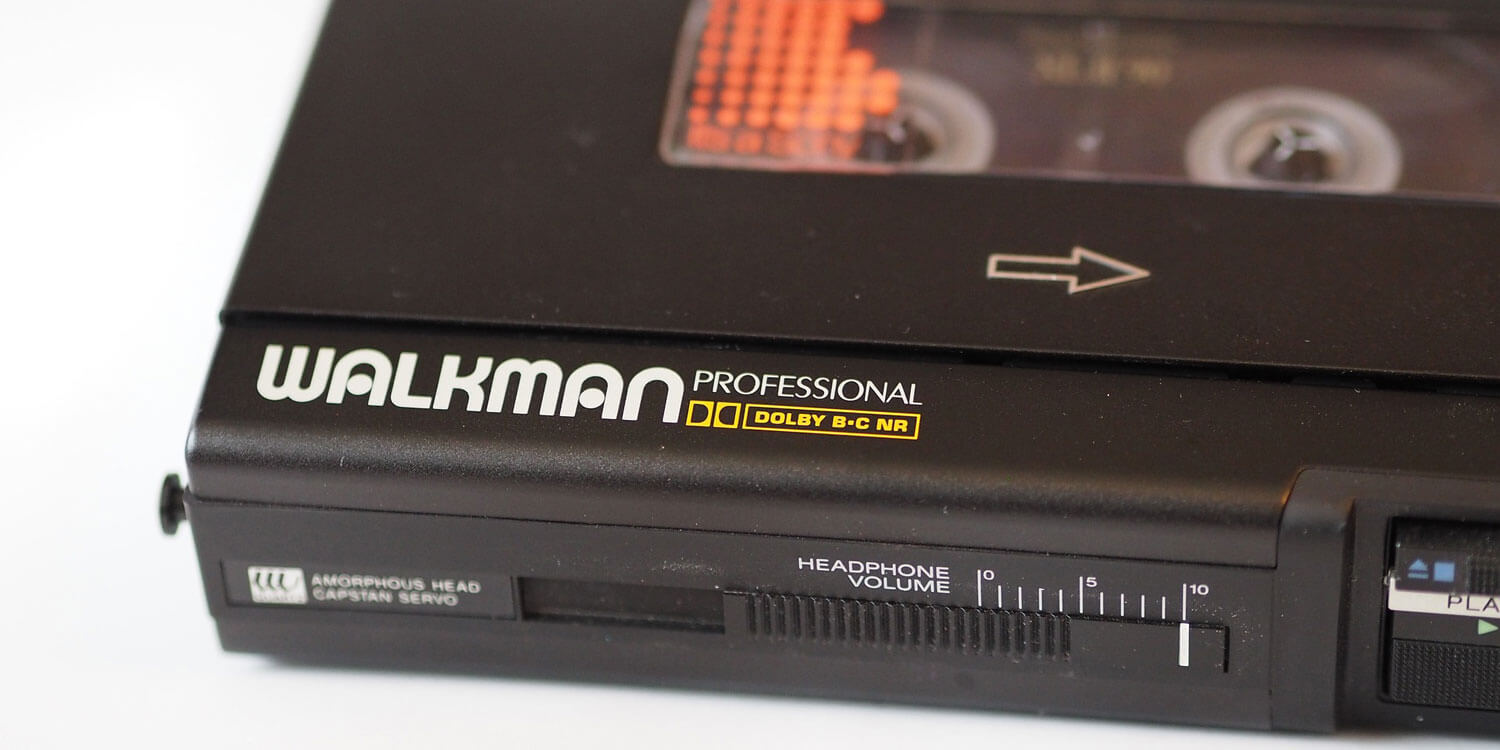 We’d like to wish Walkman a happy birthday, as it turned 40 in 2019. In 1979, the Sony Walkman first entered the market as a portable, battery-operated tape player and quickly achieved cult status. The music tape, which also enjoys cult status, is closely associated with the portable Sony Walkman music player.

Walkman and tapes formed an unbeatable team for more than two decades and probably shaped the lifestyles of everyone who was a teenager listening to music sometime between 1979 and 1999.  If you didn’t have a Walkman, you didn’t know half of what your friends were talking about! At that time, many couldn’t imagine life without a Walkman and music tapes. MP3 players, iPods, USB sticks, Bluetooth or streaming websites had not yet been invented. The Cloud did not exist but Sony did.

Thus, before CD-ROMs, USB sticks, SD cards and flash drives, the audiotape was the main storage medium for music. In order to listen to audiotapes, one inserted them into a player. Storing or transferring music to tapes was terribly complicated and time-consuming – if you didn’t want to record music from the radio, you needed a dual cassette player, which Sony also manufactured.

The eternal low storage space problem had already started back then: the capacity of a conventional tape was only 60, 90 or 120 minutes at the most (plus usually a few minutes tolerance). This corresponds to about 18, 24 or 30 songs per tape.

In order to save recordings, albums had to be carefully compiled. Most of the time it was sensible to think about what you wanted to have on the audio cassette in advance. The transfer to the magnetic tape of the cassette took place in real time. This meant that errors in the arrangement or selection of the music pieces meant that the entire work had to be done again, in the worst case from scratch. And with every save or another copy, the quality of the sound was reduced. A copy from a copy resulted in insufficient quality, even on the best cassette players or the best Walkmans.

With the advent of CD players and recorders in the mid-90s, the tape was successively replaced by CDs and, from the end of the 90s, by MP3s. In 1998, the first portable MP3 players joined the Walkman on the shelves (in the meantime, there were several models and brands of the Walkman like Sony) and from then on, the decline of the tape happened very fast. The fact that tapes and PCs are difficult to combine is probably one of the main reasons why this once proud and widely used medium has almost completely disappeared. Only Sony and Maxell still produce cassettes today. The Walkman disappeared with the tapes.

Today we store music almost exclusively in digital formats because they allow to store a lot more data. Cassettes (or even records) have become something special, cherished by enthusiasts. More data on a smaller medium, a lightning-fast compilation of various playlists and no quality losses when copying songs: compared to tapes, digital music formats offer many advantages.

However, there’s a downside: unlike tapes, digital music files often come with a copy protection function (DRM protection). If you have a song with DRM protection – even if you bought it legally from iTunes or MusicLoad – you will not be able to copy your song to another medium (MP3 player, iPod, Apple or Android smartphone, USB stick etc.) or convert it to a different format. This is a very annoying measure of the music industry from the consumer’s point of view.

But even these measures weren’t a reason to make most users switch back to Walkman and tapes. With free software like freeTunes, a program that has been popular for a long time, the annoying DRM protection measures can be circumvented completely legally and your music files can be converted to another format (MP3, AAC, OGG, WMA or WAV) if desired. The program is blazing fast and using it to copy and convert music takes just a few clicks. Only those who want to transfer their songs from their PC to a classical music cassette for their Walkman – be it for sentimental reasons or on the occasion of Walkman’s 40th birthday – still have to resort to a copying method that only works in real time.